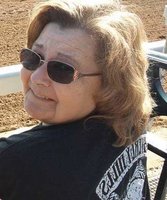 Kim Campbell Monroe, 61, passed away on February 20, 2020. Born in Lexington, Kentucky on July 22, 1958, she was the daughter of James Alan Campbell, Sr. and the late Mary Evelyn Shouse Campbell. Kim was a native and life resident of Anderson County, Kentucky where she graduated High School. After High School Kim attended Barber School where she received her certificate from the Kentucky Board of Barbering. When her barber career concluded she worked several different jobs including as a receiver at Lowe’s, at OHI America and Texas instrument. When Kim’s children were little they attended Tyrone Baptist Church, but most recently Kim was a member of the Ninevah Christian Church. Kim enjoyed spending time on the computer, making items out of paracord, crocheting, completing color by numbers books, reading, camping and anything that involved water. Kim is survived by her Father, James Alan Campbell, Sr.; her daughters, Katharyn Wilson (Lee) and Robyn Fain; her brothers, John Campbell and James Campbell, Jr.; two grandchildren, Angela and Heather Fain; and one great-grandchild, Mary Fain. She is preceeded in death by her her mother, Mary Evelyn Shouse Campbell. Visitation will be held on Monday, February 24, 2020 from 11 a.m. to 1 p.m.. The Funeral Service will immediately follow on Monday at 1 p.m.. Terry Cooper will be officiating the service. Arrangements have been entrusted to the Saffell House Funeral Home. Condolences to the family may be expressed at www.saffellhousefuneralhome.com