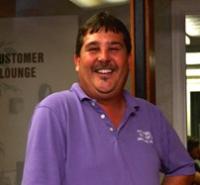 Tony Boler, 50, passed away Wednesday, March 15, 2017 at Norton Hospital in Louisville, KY. Tony was born in Frankfort, KY; he was the son of Charles Darnelle Boler and Alene True “Montgomery” Boler. Tony was the father of his two children that he loved immensely; Sarah Ann Boler and Timothy Ryan Boler.  Tony graduated from Henry Co. High School. He lived in Waddy, KY and has been the Office Manager at Hadawreck since 2009. Prior to working with the Hadawreck family he was a tool and die specialist and supervisor. Growing up family was very important in Tony’s life and that continued throughout his life. Outside of family time he was entertained by watching and critiquing movies (especially Sci-Fi), enjoyed playing video games, loved building model, liked camping, and was fond of collecting guns. Tony is preceded in death by his Mother, Alene Montgomery Boler; a Sister, Glenda Murphy; and a Brother, Roger Dale. Tony is survived by his Daughter, Sarah Boler of Frankfort; his Son, Timmy Boler of Richmond; his Father, Charles Boler; his Sisters, Teresa Stanley, Pamela Avery, and Tina Michele Boler; his Brothers, Jackie Taylor, and Douglas Taylor; and several special nieces and nephews. A Memorial Service will take place in honor of Tony Boler on Saturday, March 18, 2017 at 3 p.m. at Saffell House Funeral Home. Visitation will precede the service on Saturday, March 18, 2017 from 1-3 p.m. at Saffell House Funeral Home. Saffell House Funeral Home has been entrusted with the arrangements and condolences may be expressed at www.SaffellHouseFuneralHome.com