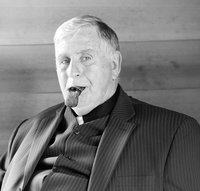 Erman Lonnie Flora, 76, of Chaplin, KY passed away on September 10,2020. He was born on February 20, 1944 to the late Erman and Christine (Terrell) Flora in Jefferson County where he resided until the late 1970’s. Lonnie graduated from Durrett High School in 1963 where he excelled at sports. He went on to receive a Bachelor of Science in Political Science from Murray State University in 1967. He married his beloved wife Charlotte Marie Lambert on June 4,1967. Lonnie began his career as a school teacher for the Jefferson County School System. He worked at Ford Motor Company, retiring after 30 years. He was a volunteer for the Anderson County Fire Department for 30 years, retiring as Captain and an active EMT for many years as well. He enjoyed sharing his love for Christmas with everyone, being the owner of the Triple F Christmas Tree Farm and Craft Shop. He was a talented wood craftsman and created many beautiful pieces for his family and business. He loved talking about history, the Bible and discussing politics around the family dinner table. In 1978, Lonnie began building the family’s log home in Chaplin, KY. He instilled the love of nature, hard work and the love of God in his children. He loved his family and especially valued his relationships with his grandchildren. Lonnie was a Christian all his life. He was a Bible scholar and served as a teacher, song leader, and Elder. He was a member of the Gardiner Lane Church or Christ at the time of his passing. Lonnie is survived by his wife, Charlotte; daughter Christie (T.C.) Courrejolles; sons Kyle (Lynelle) Flora, and Travis (Mary Sue) Flora; brother Melvin Flora; seven grandchildren and one great grandchild; and numerous family members and friends. Visitation will be held on Sunday, September 13, 2020 from 1 p.m. to 4 p.m. at Saffell House Funeral Home. The Funeral Service will be following on Sunday, September 13, 2020 at 4 p.m. at Saffell House Funeral Home. A Private Family Graveside Service will be held on a later date at Lawrenceburg Cemetery. Arrangements have been entrusted to the Saffell House Funeral Home. Condolences to the family may be expressed at www.saffellhousefuneralhome.com